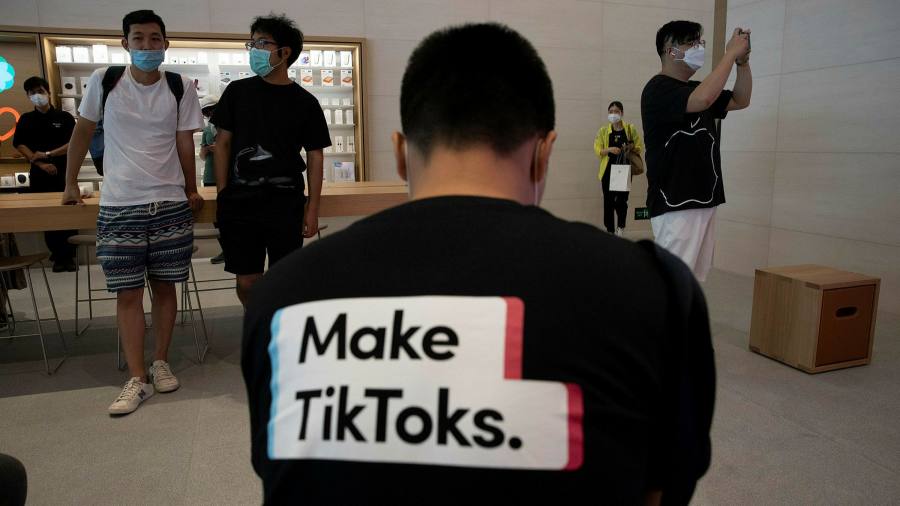 ByteDance will place TikTok’s global business in a new US-headquartered company with Oracle investing as a minority shareholder, said people briefed on a plan presented to US officials to avoid a ban of the popular video app by President Donald Trump.

As part of the proposal, Oracle will have a stake in the whole of TikTok and not just the US operations, while ByteDance, the Chinese group that owns the app used by millions of teenagers, will be the majority shareholder of the new entity.

Other US investors, potentially including the world’s largest retailer Walmart, which had launched a joint bid with Microsoft, would own a minority stake. People briefed on the discussions stressed that the exact details are subject to change.

In an interview with CNBC on Monday, Steven Mnuchin, Treasury secretary, said ByteDance had committed to “create TikTok Global as a US-headquartered company”.

The creation of a new entity shows how ByteDance is attempting to put distance between the company’s Chinese ownership and TikTok’s operations, even as it seeks to avoid the full sale of the app that Mr Trump had desired.

Mr Trump issued an executive order setting a September 20 deadline for the sale of TikTok’s US operations, having threatened to ban the video app in the US. It is unclear whether the new ownership and governance structure will satisfy his demands.

The new TikTok entity will have independent oversight and will be managed at arms-length from ByteDance, said people briefed on the discussions. The Chinese company will continue to collaborate with TikTok globally and will retain control of the powerful algorithm that keeps users engaged by predicting what sort of videos they will enjoy.

Oracle will independently process TikTok’s US data and possibly data from across the globe, said the people briefed on the discussions.*

American data will be managed and stored in the US to address national security concerns there, they added.

The current plan is in line with the recommendations made by the Committee on Foreign Investment — a government inter-agency panel that can block deals on national security grounds — before Mr Trump threatened to ban TikTok in August.

Following Mr Trump’s intervention, China announced new restrictive rules on technology exports, which would have restricted ByteDance from selling its algorithms to a non-Chinese company.

Two people involved in the negotiations said ByteDance’s offer to create a new entity headquartered in the US as well as the promise to create 20,000 jobs was likely to be welcomed by Mr Trump in an election year, and at a time when millions of Americans have lost their jobs because of the fallout of the coronavirus pandemic.

The involvement of Oracle’s Larry Ellison, chairman, and Safra Catz, chief executive — two of the few executives in Silicon Valley to openly support the Trump administration — is also likely to play well with the president, people involved in the negotiations said.

Beijing has also shown support for the plan, said one person with direct knowledge of the matter.

Before Mr Trump threatened to ban TikTok in the US, ByteDance held discussions with Microsoft about setting up a similar partnership in which the Seattle-based tech group would have a minority stake, said people briefed on the discussions.

But as the possibility of a ban grew, discussions between ByteDance and Microsoft shifted to an outright purchase of TikTok’s business in the US, Canada, Australia, and New Zealand, the people said.

Microsoft on Sunday said it was confident its “proposal would have been good for TikTok’s users, while protecting national security interests”.

“To do this, we would have made significant changes to ensure the service met the highest standards for security, privacy, online safety, and combating disinformation, and we made these principles clear in our August statement,” Microsoft wrote. “We look forward to seeing how the service evolves in these important areas.”