Trump to reveal Supreme Court nominee by end of week

Trump to reveal Supreme Court nominee by end of week 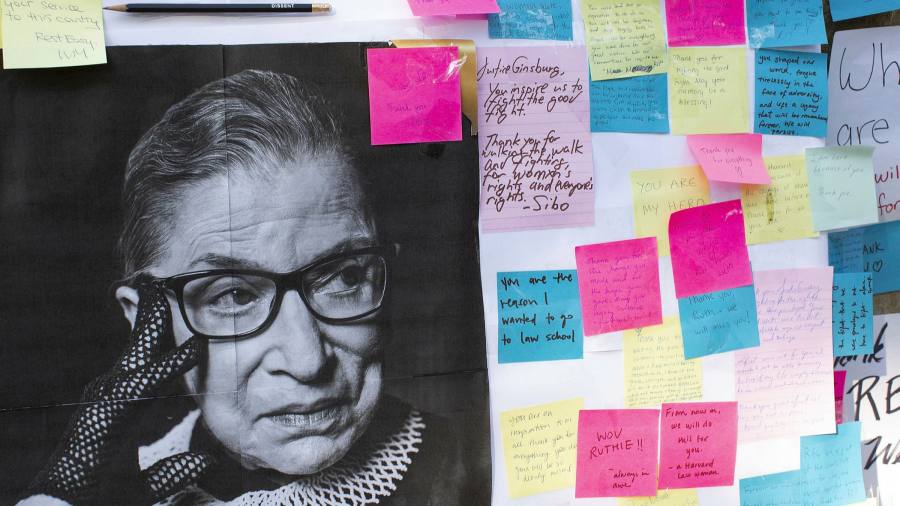 Donald Trump said Joe Biden, his Democratic rival, would put “radical left” judges on the Supreme Court, as he tried to use the fight for the open seat following the death of justice Ruth Bader Ginsburg to boost his bid for re-election.

“They will pack the Supreme Court with far left radicals,” Mr Trump said about the Mr Biden and Democrats, at a rally in Ohio as his supporters chanted “Fill that seat”.

Mr Trump said he was looking at “five incredible” women to fill the seat left open by Ginsburg’s death on Friday. Highlighting one of the issues that has resonated with even some conservative critics, Mr Trump said his administration had installed roughly 300 federal judges and would “hopefully” put a third judge on the country’s highest court.

“It is blowing their minds,” Mr Trump added.

Earlier on Monday Mr Trump said he would push to install a successor to Ginsburg before the November election.

A successful appointee could cement conservative control of the Supreme Court with a 6-3 majority, providing an enduring victory for Republicans even if they lose the White House at this election.

“We have the right to do it and we have plenty of time. I think the final vote should be taken frankly before the election,” Mr Trump said on Monday.

Mitch McConnell, the Senate Republican majority leader, separately vowed on Monday to hold a vote on Mr Trump’s nominee this year, but declined to say whether he would push to hold the vote before or after the election.

Mr Trump said he would unveil his pick on Friday or Saturday, after memorial services for Ginsburg. She will lie in repose at the Supreme Court on Wednesday and Thursday, the court announced on Monday.

Ginsburg will then lie in state in the US Capitol building on Friday, becoming the first woman to receive that honour.

Her death has kicked off a political firestorm just weeks before the election. Democrats have cried foul as Mr McConnell has vowed a vote on Mr Trump’s nominee.

Mr McConnell said the Senate had “more than sufficient time” to process any nomination from Mr Trump “this year”, saying: “History and precedent make that perfectly clear.”

The Senate majority leader said there were 43 days until November’s election, and 104 days until the end of the Congress, leaving open the possibility that a vote could be held after polling day but before new lawmakers are sworn in early next year.

In 2016 Mr McConnell blocked a vote on Barack Obama’s Supreme Court nominee, Merrick Garland, arguing voters should get a say in an election year. Republicans have argued this time is different, because both the White House and Senate are controlled by the same party.

Chuck Schumer, the Senate’s top Democrat, on Monday said Mr McConnell and Lindsey Graham, the Republican chairman of the Senate judiciary committee, had “made a mockery of their previous position”.

“They seem ready to show the world their word is simply no good,” he said. “It is enough to make your head explode.”

Joe Biden, the Democratic presidential candidate, made a personal appeal to Republican senators on Sunday, asking them to “please follow your conscience”.

Ginsburg in her final days dictated a statement saying her “most fervent wish is that I will not be replaced until a new president is installed”, according to National Public Radio.

Mr Trump sought to cast doubt on the statement, claiming Democrats in Congress had written it. “I don’t know that she said that, or was that written out by Adam Schiff and Schumer and Pelosi. I would be more inclined to the second,” he said, without offering any evidence to support his claim.

Republicans have a 53-47 majority in the Senate, and Mike Pence, the US vice-president, can cast the deciding vote in the event of a tie. That means Mr McConnell can afford three defections and still push through Mr Trump’s nominee.

Mr Trump on Monday attacked the senators, saying they were both “very badly hurt” by their statements.

The chances that Democrats may peel off enough Republican votes to block the confirmation process appeared to diminish on Monday evening.

Chuck Grassley, the former Senate judiciary committee chairman who said as recently as July that if he were still running the committee he would not hold hearings, said he supported installing Mr Trump’s Supreme Court pick.

“While there was ambiguity about the American people’s will for the direction of the Supreme Court in 2016 under a divided government, there is no such ambiguity in 2020,” Mr Grassley said.

Joni Ernst, another Iowa Republican senator, issued a similar statement saying she would “carry out my duty — as a member of the Senate judiciary committee — to evaluate the nominee for our nation’s highest court”.

Mitt Romney, the former Republican presidential candidate and Utah senator who broke with his party in Mr Trump’s impeachment trial earlier this year, has yet to reveal his views on the matter. But even if he were to cross the aisle, Democrats would need a fourth Republican vote — in addition to Mr Romney, Ms Collins and Ms Murkowski — to block Mr Trump’s nominee.

The leading candidates for the nomination include Amy Coney Barrett, an appeals court judge and devout Catholic who is a favourite of conservative activists, and Barbara Lagoa, also a federal appeals court judge who had been the first Hispanic to be appointed to the Florida Supreme Court.